Posted by: mickeystamler Posted in: The Blog Comments: 0 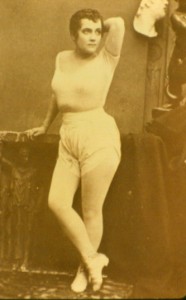 The new, updated, totally pop Sherlock Holmes opens in theaters across the Ailing Empire on Christmas Day, 2009. Possibly visible among the mayhem created by nearly 100 special and visual effects technicians and artists will be the stars: Robert Downey Jr. as Sherlock, Jude Law as Dr. Watson, and Rachel McAdams as Irene Adler. Who’s that last, you ask. If you were a devotee of the Holmes canon, an avid reader of the adventures of Arthur Conan Doyle’s master detective of late Victorian times, you would know. For Watson opens the intriguing tale “A Scandal In Bohemia” with the following:

To Sherlock Holmes she is always THE woman. I have seldom heard him mention her under any other name. In his eyes she eclipses and predominates the whole of her sex.

Watson hastens to inform us that his idol was not in love with “the well-known adventuress,” merely in awe. For she alone had beaten him at his own game.

You might also ask–we surely did–who is Rachel McAdams? The up-and- coming actress, a spunky, natural blonde of Irish background from Canada, would seem a surprising choice to play the brilliant, scheming, blackmailing, brunette Irene. In the original story, the stand-offish King of Bohemia has come to consult Holmes, and he describes Irene as having “the face of the most beautiful of women, and the mind of the most resolute of men.” There is a photograph of the two of them cozy together, and Irene threatens to make it public to derail the King’s marriage to a Scandinavian princess. Actually, the King remains in love with Irene, saying, “I wish she had been of my own station! What a queen she would have made!”

In the new movie Irene is Sherlock’s former and wannabe girlfriend, and Downey has bulked up to play Sherlock as a martial artist. Some way to treat “the most perfect reasoning and observing machine that the world has seen,” as Watson calls him. The movie’s director is Guy Ritchie, Madonna’s ex-husband, otherwise known for caper comedies. He probably needed his karate training to deal with the movie’s nine producers. We look forward to watching the Sherlock flick and its proposed sequel: Sherlock Holmes In Space.

Now we must confess: Having read the entire Holmes canon, we are going to especially miss two Sherlockian giveaways: his plaid cap with the little peak and the big flaps (it’s gone), and his cocaine habit (Downey, former drug addict, has become an incredible hulk!). It all sounds like good clean fun: Holmes and Watson save Britain from being destroyed (Gordon Brown may yet accomplish that). Alas, there is no scandal, no Bohemia, no dummkopf King, and no lowdown Sherlock trying to steal a photo memento of love from sexy, clever Irene. So there follows a backstory that would make, if not as obvious a money-maker, a better movie.

Arthur Conan Doyle was a young lad in Edinburgh in the 1860s when Adah Isaacs Menken, aka The Naked Lady, was the toast of London and toured the British Isles. Photos showing poses from her daredevil melodrama Mazeppa, shot by the first celebrity photographer, Napoleon Sarony, were in every bourgeois household’s parlor album. Posters of her scantily clad atop an untamed stallion were plastered all over the major towns. Then there were the front-page scandals about Adah and her numerous husbands and lovers, including novelist Alexandre Dumas, bareknuckle boxing champ John Heenan, and Charles I, King of Württemberg. No doubt Arthur’s straight-laced parents tried, and failed, to keep from him the outrageous doings of The Royal Menken (another nickname) before sending him to a Jesuit school. By fifteen Arthur had graduated, rejected religion, and declared himself an agnostic. He was at heart a romantic who would have one great love affair in his life.

Conan Doyle was a failed eye doctor before he became the bestselling author of The Adventures of Sherlock Holmes and various sci-fi and historical novels. In his “Bohemia” tale, his first and perhaps best, there are numerous similarities between Irene Adler and Adah Isaacs Menken. First, the initials: IA vs. AIM. Second, both women are of Jewish descent. Whether Conan Doyle knew it or not, Adah was also part black. Third, each woman was the notorious sex symbol of her day. Fourth, the emphasis on a particularly scandalous photo of the King with Irene brings to mind the photo of Adah with the elderly, portly Dumas, both in what the Victorians considered undress. It went round the world, outraged the righteous and caught the attention of Mark Twain, a formerly hopeful admirer of AIM. Fifth, speaking of dress, both Irene and Adah (a good friend of George Sand) were blatant crossdressers at a time when it wasn’t done. Sixth, Adah, like Irene, had an affair with a handsome king, although Adah’s well-publicized liaison with King Charles of Württemberg was sexless, while Irene was in bed with the King of Bohemia. Charles was gay, and his supposed affair with Adah was a publicity stunt to distract attention from his actual affairs with various men. The king and the actress became close companions while she was getting over the split with her fifth husband, an American gambler and Confederate spy. Let’s quit with number seven: Both Irene and Adah were resolute, courageous, yet beautiful and very female. In fact, Rachel McAdams, who has dyed her hair dark for Sherlock Holmes, looks a good deal like Adah. Maybe casting did some historical research!

Do see the movie. Read Conan Doyle’s story to find out how Irene bests Sherlock. To learn more about the incredibly adventurous life of Adah Menken, visit our website: https://www.thegreatbare.com. You’ll find lots of interesting info about Adah and her guys, Sarony photos of The Naked Lady, our ongoing Nude News column, and even a screen treatment for an Adah Menken biopic. Also, see http://www.myspace.com/adahmenken at MySpace for her slide show, her blog and many friends. This woman was so far ahead of her time that she is totally now.